Moscow, The New Tretyakov Gallery on Krymsky Val
I could live here!

The curators of Mikhail Larionov exhibition at the New Tretyakov on Krymsky Val were quite surprised to hear a visitor make this exclamation. Could it be that the average art viewer was no longer afraid of avantgarde and had learned to understand or even love it? After all, it wasn’t long ago that people who came across Larionov’s Spring in the first hall would timidly step back, explaining in hushed tones that they are not good at getting this.

To be sure, today’s museum goer has already seen and gotten used to quite a lot. The quick-paced expansion of modern art to more and more museum spaces points at the classical completeness of the “old” avant-garde, which has already celebrated its centenary. Kandinsky and Malevich, Tatlin and Rodchenko, Chagall and the “Amazons of the avant-garde,” as well as their ideas, forms, and style systems, firmly secured a place in wider culture.

But Mikhail Larionov somehow does not fit into this enshrined assembly. His carnival character, shapeshifting between the images of a dandy and a jester, dancing on the border of seriousness and parody, requires a different approach; his “vsyochestvo” or “everythingism” is not so much a strict concept to be studied as a life stance equally natural for the artist, the theorist, and the collector in him. For these reasons, the idea behind the exhibition was to introduce the audience to Larionov as a human being and to the events of his life in all its complexity, rather than to set up a conventional display of works and the artist’s creative evolution. Judging by feedback in the guestbook, this immersive effect worked beyond all expectations. Some visitors, according to their comments, felt as though living in “that era,” in others the visit sparked their interest in the years of the artist’s life that the exhibition omitted, and for many discovering Larionov turned into a revelation. There have been critical responses as well, even harsh ones, mostly concerned with the exhibition’s layout and design, certain organizational issues. But Larionov himself has been seen and understood, as the words the visitors have picked to describe him attest: “inner light,” “diversity of interests,” “humor and tenderness.” Quite a few entries have been made in children’s handwriting, many include drawings — faces, animals, an inviting little bench that actually would fit well in the halls. Larionov would have approved…

Of course, the exhibition was no surprise to true art lovers. Larionov has never been forgotten. His paintings are constantly on display at the Tretyakov Gallery and other museums. Books about him aren’t hard to find — an ample number of them has been published. But it turns out that all this hasn’t been enough. Neither individual exhibits, nor reproductions, nor texts can convey the right impression of Larionov’s art. As Alexander Benois remarked upon seeing the familiar works at Natalia Goncharova’s exhibition in 1913, “It means quite a lot to see them now as part of the artist’s oeuvre.” Let us add another important fact: Larionov’s paintings are difficult to reproduce in print because they lose greatly in color. And it is color — with its subtlety and wealth, psychological effects, themes within series and individual paintings — that is the essence of Larionov’s art, the key instrument of the distinct impact and rare charm of his works. 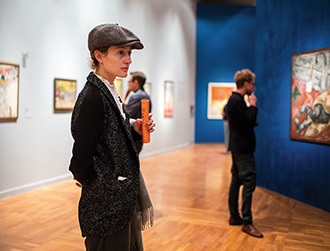 Take the green-and-blue symphony of his many gardens, the dusk and dawn tints of the landscapes, the dazzling animalist sun, the sunset glow of his fishes and peacocks; his Fauvist experiment — the crimson sea, red bathers and blue pigs; the mockingly conventional hues of Venus figures, the color streams of Rayonism, the vibrant motifs in The Four Seasons; finally, the delicately subdued, dissolving combinations and shades of his later works. All this does not merely demonstrate the power of the artist’s imagination. For Larionov, color harmony or dissonance is the means of recreating the emotional atmosphere, the initial impulse that conceived the painting.

Gifted with an unusually sharp perception, both visual and emotional, Larionov had admitted that he preferred intimacy to grand statements — but pegging him for an artist of a lyrical nature would not be entirely correct. He is much less interested in the inner life of his being than in the life outside. He does not attempt to flavor the visible reality with his own moods and affairs: confessional tones are alien to him. But he seems to hear the grass grow, delves into the affairs of pigs and dogs, understands the moods of oxen and the personalities of camels. The emotional range of his art is incredibly wide. He can be cheerful and cunning, ironic and rude, concerned equally with the beautiful and the ugly, the poignant and the funny — the opposites sometimes inseparable from one another. And that is why Larionov employs various formal techniques and manners of painting. 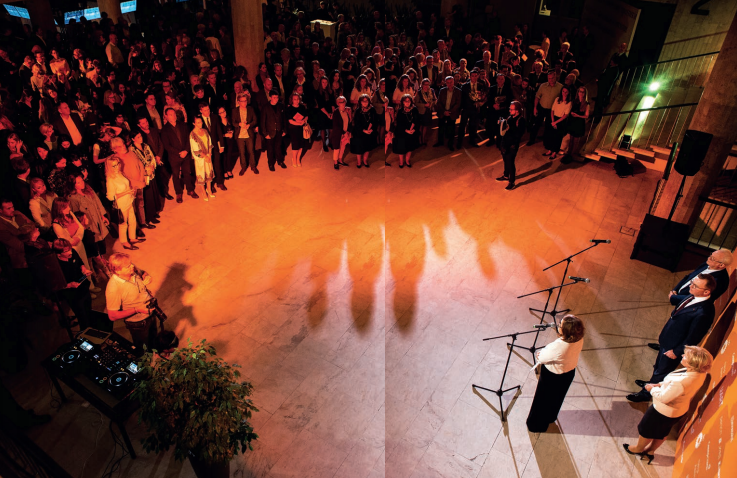 It is reassuring to see the modern art viewer rising up eagerly to face Larionov’s many faces, his multivocal diversity, swinging from high to low and back. Many point out that it is precisely thanks to this feature that the exhibition does not look monotonous or boring. In Larionov’s times — and even much later, for that matter — critics did not accept such a “proteism”, scandalized by the lack of a single unifying core, style, theme, or ideal in the artist’s work. Indeed, we have gone far from the days of aesthetic normativity and approached the freedom in the understanding of art long ago professed by the icons of Russian avant-garde. Mikhail Larionov was the first to give an example of this freedom.

Considered broadly, his principle of “everythingism” implies that the artist is free to go beyond the boundaries of the once-chosen “creative self” or image, to be different, like any other living person, to readily absorb a multitude of experiences, both in life and art, and respond to them. Nothing should restrict this freedom. Artists have the right to paint whatever they see, as well as to fabricate, quote, invent, combine, mix and modify their own and others’ finds — in general, do whatever they want… 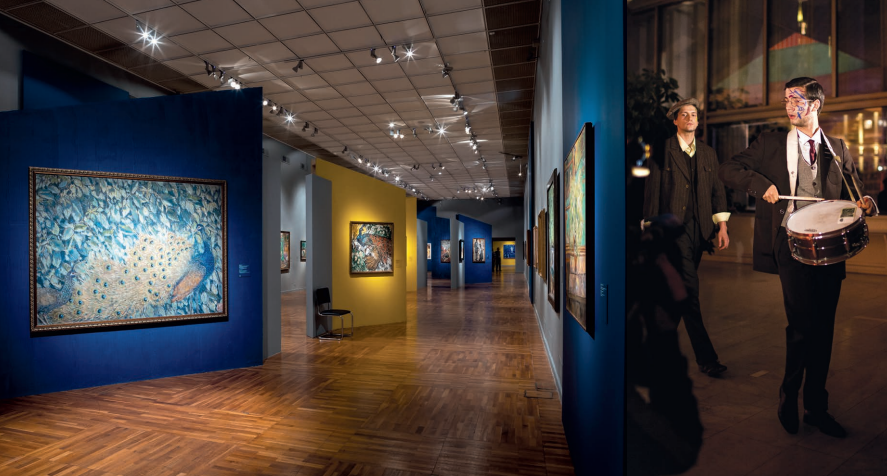 The exhibition’s visitors can see what Larionov himself had been doing over the course of his long and rather hard life. Not always he appears cheerful, full of humor and mischief — in fact, the art of his later years acquires certain wistful and lonely notes. Life goes past the season of full bloom, and colors fade. We have not seen this Larionov before, and this period of his work is yet to be understood and appreciated. Some viewers may even find it disappointing, but walking with a wonderful artist along his entire life path is a fascinating adventure in any case.

This Larionov’s exhibition delivers no final judgment, but rather raises questions and outlines prospects. We hope others will follow.