For the first time at the Pushkin Museum: Georgian painters of the first third of the 20th century

This fall-winter exhibition season in Moscow museums has seen a grand assortment of vibrant art events. Long queues cannot frighten art lovers keen to view the masterpieces of the Vatican collection or visiting displays from French and Italian museums. Going to an art show has become a fashionable trend, and its followers closely monitor museum programs for updates, booking tickets in advance. The U-ART fund, jointly with the Pushkin State Museum of Fine Arts, has created a project that in the list of the winter 2016/17 exhibitions is worthy of a prominent spot — thanks to the concept behind it.

The exhibition «Georgian avant-garde of 1900−1930s: Pirosmani, Gudiashvili, Kakabadze, and others. From museums and private collections» is open to the public from 8 December 2016 to 12 March 2017.

For the first time in the modern Russian history, works of the most prominent Georgian avant-garde artists of the first third of the 20th century have been brought together at one exhibition. The three floors of the Private Collections Department of the Pushkin Museum host the display of paintings and drawings by Niko Pirosmani, Lado Gudiashvili, David Kakabadze, Kirill (Cyril) Zdanevich, Petre Otskheli, Zygmunt (Zygi) Waliszewski, Irakli Gamrekeli, and others. The exhibition also includes the artists’ lifetime prints, cinema posters, theatrical costumes, archive items, and movies.

Major Russian museums, including the Tretyakov Gallery, the Russian Museum, the State Museum of Oriental Art, the Bakhrushin Central Theater Museum, as well as private collectors from Russia and Georgia, have been invited to participate in the event. By gathering artwork from multiple museums and private sources, the curators Iveta Manasherova and Elena Kamenskaya have managed to create a one-of-a-kind display featuring more than 20 pieces by Niko Pirosmani (Pirosmanashvili), each boasting an impeccable provenance and fascinating history. 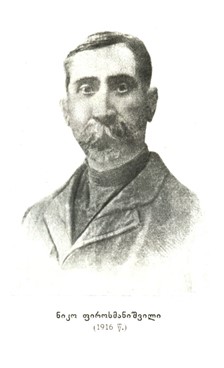 A million legends and the truth of art

In 1912 Mikhail Le Dentu and Ilya Zdanevich during a trip to Georgia discovered a self-taught painter named Niko Pirosmani, whose art was in tune with the most daring artistic ideas of the era and reminiscent of Henri Rousseau’s primitivism. For Georgian artists of the «new» generation, Pirosmani’s paintings were an example of pure art free of academic staleness. Pirosmani’s works, for the first time displayed in Russia in 1913 at the Mishen’ exhibition, made a huge impression on Russian avant-garde artists. Pirosmani’s influence can be felt in Mikhail Larionov’s and Natalia Goncharova’s primitivist paintings.

In Russia, Pirosmani’s works enjoy affectionate appreciation; tales associated with his life and art are well-known. The poor artist’s romantic attraction to actress Margarita has become part of the Pirosmani mythos and made the plot of the popular song «Million red roses.» To this day, most stories about the artist’s life have no hard documentary evidence. «Niko Pirosmani has so completely dissolved in the common folk that it is difficult for our generation to discern the facts of his personal life. His everyday life was so mysterious that, perhaps, he will have to remain without a conventional biography…» Written in 1926, these words still make sense today.

For two of the other artists whose paintings are featured at the exhibition –  Lado Gudiashvili and David Kakabadze — Pirosmani’s work was an object of unflagging interest. Gudiashvili met Pirosmani in 1915, and this encounter undoubtedly had an impact on the younger artist. Not unlike Pirosmani’s, his works also relate the atmosphere of Georgian life, its rhythm and flavor. However, Gudiashvili’s style, formed by the culture of his native land as well as by Persian miniatures and later refined during his five-year stay in Paris, is distinctly elegant and sophisticated. In Paris Gudiashvili quickly plunged into the maelstrom of artistic life, meeting and befriending the likes of Amedeo Modigliani, Pablo Picasso, Fernand Leger, and other artists of the circle known today as the Paris School. Gudiashvili’s art displayed at the Salon d’Automne enjoyed success, which brought him more friends as well as lovers of his talent, happy to acquire his paintings. 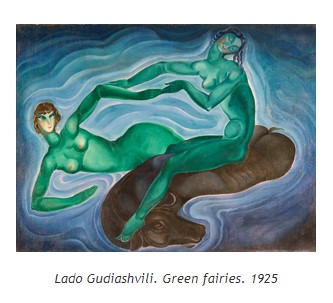 As the Paris period is considered the most remarkable and original in Gudiashvili’s oeuvre, it is no wonder most works presented at the exhibition in the Pushkin belong to this time in his career. This is how the famous art critic Maurice Raynal, the author of the first monograph on Lado Gudiashvili published in 1925 in Paris, describes his work: «Being embodied in the exclusively national spirit, it [the art] presents to us the scenes of everyday Georgian life. Women and warriors with strikingly shaped eyes — true children of a nation lively, belligerent, drunk with their outdoors lifestyle, mountainous expanses, fast horseback riding, and all sorts of adventures. Here they are fighting, here having a riotous feast, here they are dancing, here seeking comfort in love, and almost all of it, so to speak, — on horseback, for the horse in the life of a Georgian plays the most significant role.»

Gudiashvili’s paintings are truly poetic and full of symbols. Themes and characters depicted by the artist reflect his singular talent and the unending homesickness that haunted him even in the happiest and most successful Parisian years. In 1925 Gudiashvili decided to return to Georgia, despite the diverse  perspectives the art world of Paris opened to him.

Like his friends Lado Gudiashvili and Shalva Kikodze, David Kakabadze received a grant from the Georgian Artist Society and, together with Gudiashvili, arrived in Paris on January 1, 1920. Both artists instantly fell in love with the city and often roamed the squares and streets of Paris, making pencil sketches, but their styles were decidedly different. Lado’s thin, broken lines starkly contrasted with David’s vibrant strokes. Both drew inspiration from Georgia, but Kakabadze’s works testify to the fact that he was fascinated with his homeland’s nature first and foremost. He was also enthralled by the architecture of ancient Georgian churches, especially the complex stone relief patterns decorating their walls. Kakabadze studied these ornaments specifically and even wrote an entire paper on the subject complete with his sketches. 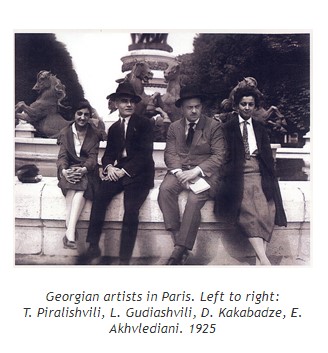 Except for a few early items done in the realist manner, the exhibition presents mainly abstract works by David Kakabadze, created during his Paris period. The artist’s transition to abstraction can be observed in the watercolor set entitled «Brittany». It was this north-western province of France, visited by Kakabadze in 1921, where he created first realist, then cubist, and finally biomorphic images of Breton houses and boats on water.

David Kakabadze was an experimental artist and researcher. Having studied engineering at the Natural Sciences Department of St. Petersburg University), he loved to tinker with mechanical devices. In 1922, he created a stereo movie projector that enabled the audience to see three-dimensional images without glasses. Kakabadze patented this invention in many countries — France, USA, Great Britain, Germany, Denmark, Spain, Belgium, Italy, Hungary, and others — and a stock company was founded to fund the construction of a working prototype. Kakabadze was able to build the prototype and get first 3D images, but subsequent lack of funds prevented him from working further on the invention. Later, drawing on this experience, the artist created his collages or, as they were named afterward, constructive-decorative compositions, which may be considered his special legacy in visual arts. The materials he used were wood, metal parts, lenses, mirrors, and other items left over from his inventions. The images created in this manner were closer to organic, embryonic shapes. Kakabadze was one of the first to use spray paint for coloring the background. He also devised special frames, wooden and metal, adorned with various spare parts, to be integral components of the compositions. 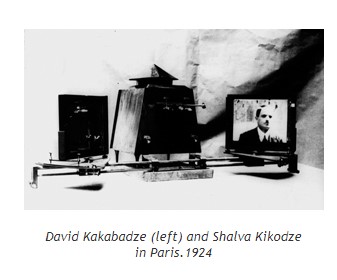 The art of David Kakabadze is not as well-known to the Russian public as it deserves. Most of his works presented at the exhibition come from private collections. Kakabadze’s only work from the Tretyakov Gallery collection was donated to George Costakis Museum. It is noteworthy that avant-garde collectors have always valued Kakabadze’s works highly. The US artist, collector, and art critic Katherine Dreier, who has done much to popularize avant-garde art in the United States, acquired an abstract sculpture by Kakabadze and several of his watercolors in the mid-1920s. Thus the Georgian’s art appeared at the Brooklyn International Exhibition in New York in 1926 and later ended up in the collection of the Yale University Art Gallery, to which  Dreier donated a treasure trove of modern art.

Upon their return to the homeland, the lives of David Kakabadze and Lado Gudiashvili followed different paths. However, both artists had worked in theater and cinema. Together they acted as production designers of a black-and-white silent film «Saba». Gudiashvili also participated in the production of the films «Khabarda», «Doomed», «The Divorce», and others. The undoubted masterpiece of David Kakabadze as a film art director was the documentary «Salt of Svaneti.» Fragments of these and other Georgian motion pictures of 1920−30s are shown at the exhibition.

A special part of the exhibition displays theatrical works of Georgian artists. The transformation that Georgian theater underwent after the Russian Revolution was accomplished owing mostly to the efforts of directors Kote Marjanishvili (1872−1933) and Sandro Akhmeteli (1886−1937). The experienced Marjanishvili, having taken the helm at the Tbilisi Shota Rustaveli Theater, found gifted young artists Irakli Gamrekeli and Petre Otskheli, whose early 1920s works constituted a breakthrough comparable to the one the constructivists made in the Russian theater. The production of Vladimir Mayakovsky’s «Mystery-Bouffe», in the end abandoned, became the first experiment, and the visual arts part was entrusted to Gamrekeli. 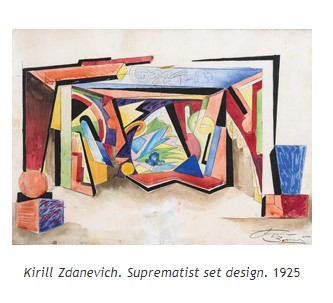 Theatrical drawings by P. Otskheli, I. Gamrekeli, and K. Zdanevich — bright, unusual, futuristic — introduce the exhibition visitors to the creative atmosphere of Tiflis of the 1920−30s, with its indispensable ingredient — the famous artistic cafés «Himerioni», «The Argonauts’ Ship», and «Peacock’s Tail». The walls of these remarkable establishments were painted by the likes of Gudiashvili, Kakabadze, Sudeikin, and Toidze. They were frequented by Georgian poets, writers, artists, and philosophers, as well as their Russian counterparts who fled from the famine and revolutionary turmoil to the warm and welcoming Tiflis (capital of Georgia, Tbilisi after 1936). Within their walls were born the poems and plays later published by the famous group 41 Degrees founded by Terentyev, Kruchenykh, and Ilya Zdanevich. Some of these publications are also displayed at the exhibition, complementing the diverse and vibrant panorama of the artistic life in Tiflis during the first third of the 20th century.

In total, the exhibition «Georgian Avant-garde» features more than 200 paintings and drawings as well as a printed publication, which includes a series of scholarly articles written by an international team of authors, the catalog, and the art album section. Illustrations and catalog materials have been provided in part by museums of Georgia, which responded enthusiastically to the organizers’ inquiry. The exhibition of Georgian avant-garde in the Pushkin Museum is an international project that aims to emphasize the importance of dialogue between the two countries the histories and cultures of which have been inextricably linked for many centuries.